This is Ally and Sophia (Trimama's daughter) at Target Center Thanksgiving morning. 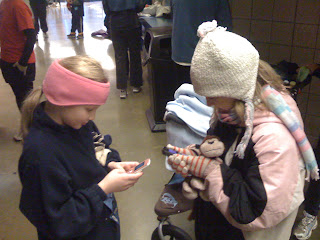 Sophia: ALLY!
Ally: SOPHIA!
Sophia: How r u?
Ally: Awesome! How r u?
Sophia: Awesome!
Ally: What's that?
Sophia: I brought a Webkinz.
Ally: Cool! Can I see?
Sophia: Sure!
Ally: Neat.
Sophia: Thx. He can run the 5k with us.
Ally: Cool!
Sophia: LOL
Ally: LOL!
They hadn't seen each other much since our vacation in Washington state, so here is how their excited reunion went when they saw each other at the Target Center. It was so funny seeing them texting each other while they were right there. So cute. Little girls love their phones.
We all ran together until about the last few blocks or so when the Soapinator took off and finished strong... but Ally came in at 38:50 - her Personal Best! Way to go Ally! Not bad for an 8 year old!
Here she is running with Hugo and Baby Owen: 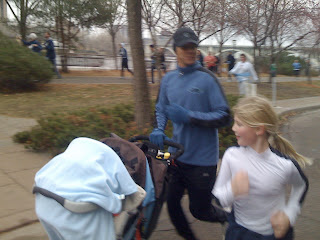 And here is a group shot after we all came in: 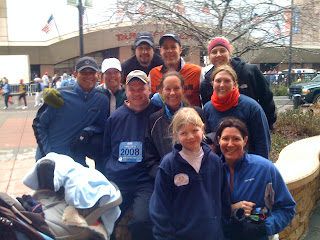 front: Baby Owen in the stroller, Ally and me
middle: Erik (Sarah's hubba - it was his first 5k and he was WAY ahead of everybody!), Laura's sister Sarah (who runs pretty much all my marathons with me), Kelli (Baby Owen's mom)
back: Hugo (Owen's dad), Laura the bride, Greg the groom, Christy, and TriNick in the way back.
Time to get to the best T-day dinner EVER. We ate at our church - no fighting siblings, no drunk Uncle Eds, no quibbling over the dark meat... and Pastor Dan had us all playing Bingo for "valuable" prizes, and we even had a scavenger hunt, so there was a lot of running around inside and outside the church - the perfect thing after a big meal.
After that, Laura and the bridesmaids headed back for the rehearsal while I stayed back at the house getting everything ready for the after-rehearsal party at our house. It was great! About 30 or so of Laura's and Greg's family and out of town friends came over for little sandwiches and cocktails. Greg made the most beautiful toast to Laura - everybody wanted to cry. He is such a prize!
After the guests left, Christy and Laura and I got in our pj's and talked until Laura kicked us out of her room so she could get to sleep.
After I get more pics, I'll post more about the weekend...
;-)
Posted by SingletrackJenny (formerly known as IronJenny) at 11/30/2008 08:27:00 PM 6 comments:

Iron Greg and IronLaura got married last night! I don't want to steal any thunder from pics Laura will probably want to post, so I will just give you a glimpse here: 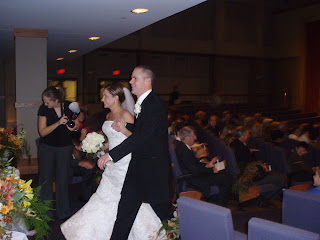 It was a beautiful wedding - so many friends and family members came out, Laura and Greg both looked gorgeous, the weather was great. If you missed TriNight, you would have had a second chance to see all your friends at the wedding - a jillion triathletes were there.
Hugo and Kelly and 4 1/2 month old "Baby Owen" came from CA, and Christy from CT and stayed at our house. My kids just loved having the baby around, and we are so bummed that they all left this morning!! 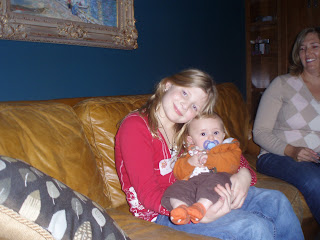 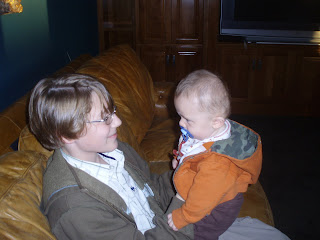 The guests began to come to town on Tuesday and we had a great time eating, drinking and catching up, going for group runs on the trails and doing all the prep work for the event. Sure was a lot of love floating around. There are lots of great pictures on other people's cameras... hopefully I will get some of them soon.
Here is Bobby at the reception cuttin' a rug with one of the flower girls. 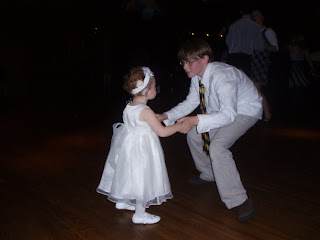 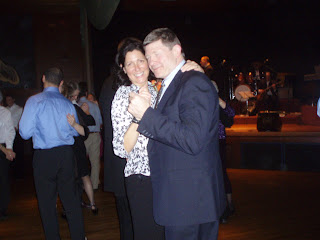 ... and all the kids were breakdancing: 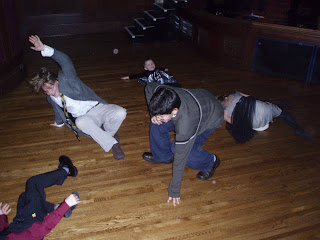 It was really a great weekend.
Congrats to two of the nicest people I've ever been so lucky to know!
Posted by SingletrackJenny (formerly known as IronJenny) at 11/29/2008 11:00:00 AM 6 comments: 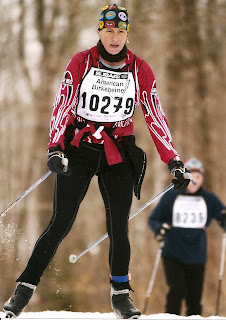 Here's what we used to do in Minnesota in the winter. 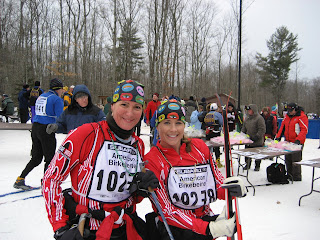 I knew we were on to something...

Remember when a few of us registered for Ironmans and listed our occupations as silly stuff? One time Tim was a "Leaf Raker", Joe Bobby was an "Underpants Inspektor", I was a "Smokin'Hot Nascar Wife"... etc.
I see from the list of registrants at Ironman Arizona that the trend has really taken off . Check these out...
Cat Herder
Grave Digger
Hustla!
Master Chihuahua Wrangler
Mine Sweeper
Moustache Jockey
Mullet Designer
Ninja
Pirate
Pragmatist
Prime Minister
Prospective Eccentric Billionaire
Rapper
Supreme Allied Commander
I keep wondering when Mike Reilly will start announcing them as he calls their names over the finish line.  Some of these are great!
What have you been?
Posted by SingletrackJenny (formerly known as IronJenny) at 11/17/2008 07:11:00 AM 10 comments:

Well, that was fun!
Last night a bunch of local triathletes hosted the end-of-season banquet. Once a year we get to see everyone with combed hair, and even smelling nice. Our guest speaker was the one and only Olympic triathlete Hunter Kemper. Here he is below, flanked by Jeremy Baker (one of my FCA teammates) and me. 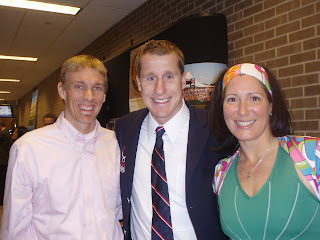 He regaled us with his Olympic and other race stories. Hunter is hilarious.
Truly.
I would hang out with this guy in real life if he lived in my neighborhood.
He used this platform to talk about the charity he supports, A-T. It's a genetic and fatal disease which afflicts only about 500 children in the U.S. each year. The disease causes progressive loss of muscle control, immune system problems and a strikingly hight rate of cancer. He met two little girls, sisters, who both have it and they really touched his heart. They will die in their teens, unless a cure is found.
He is also a Christian (and even told the crowd that he could feel the hand of Christ on him as he raced in Beijing this summer)!  I thought it was really cool that Hunter openly embraces his faith, especially since anti-Christian sentiments are what's popular, and especially harsh in the last few months. Anyway, you can read more about A-T at www.atcp.org. Help if you feel driven, as most of us did last night.
Jeremy is opening a new bike shop in Chaska, MN in January. Actually, he is taking over an existing shop, Get Your Gear, but will be changing it up a lot... it will now also offer a great assortment of super fun women's running and tri clothes. So Laura and I decided to wear some of it last night. I am in a SkirtSports running dress, with tri shorts underneath, and bolero-style arm-warmers with matching headband from Sheila Moon. Laura is in arm-warmers and headband. The fabrics are soft and wicking, they fit true to size, and they are nothing short of seriously hawt. I mean, c'mon. Just look at us. ;-) 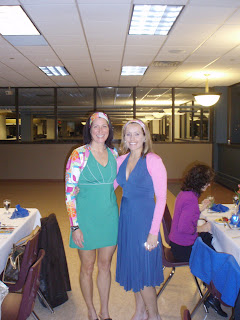 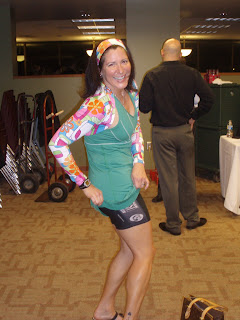 There was also a blogger reunion of sorts: Taconite Boy, Trimama, me, Andy Mork (serious cyclist and cross-country skier), Kate Monster, and Mark Evenson. As usual Mark is hamming it up. Back in the old days we used to run "throwaway" races together, but now he's really fast, so we can't run together anymore. I mean he's really, really fast -- he even has his last name printed on the butt of his Fastskins. But I still remember when he used to stop for group pictures during races. Maybe I can dig one up and post it... te-he.  Kate is also an amazing athlete by day, and they are the cutest couple EVER. 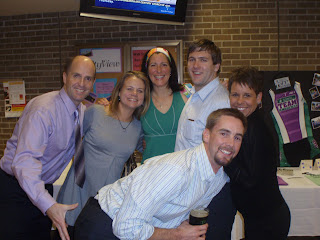 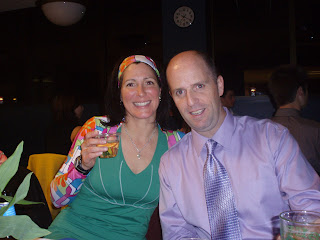 Speaking of super fast, Jen Lenarz was also there. I love this girl - like other local speedsters, (how did I not get a picture with you Jules???), like our own "Just-back-from-Kona-Cathy", 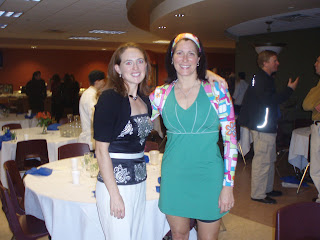 ...Jen always smiles, waves and cheers for you, when she spots you on the course. 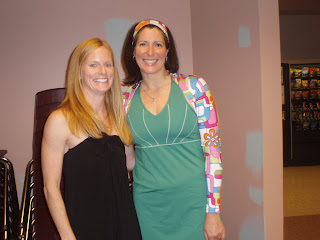 Yesterday I initiated ski season with a 30 minute ski on the rollers (no snow yet). Ally came along on her rollerblades.
I didn't ski at all last season due to the heart condition, but since it's not going away (and I can still run, bike and swim), I plan to ski this year.
Didn't fall, so at least I know I can still stand on them.
Laura - you want to go to Baker Park tomorrow after B/S at Shannon's?
Below is Bobby getting in a cold weather trail run/treasure hunt this week. As many of you know we switched schools this year, and I have to say it was the best thing we could have done. Last year Bobby rarely had less than 4 hours of homework, and this year he has had about one hour. Maybe a bit more on occasion, and sometimes a bit less. But he plays after school now. Really! Who knew! He enjoys the trails, he plays his Wii, he goes to friends' houses, he sits by the fire-pit with us.... he even stopped biting his fingernails. He made A's at the old school, and makes A's at the new school. But he loves his teachers and his classmates, and he's just so happy now. 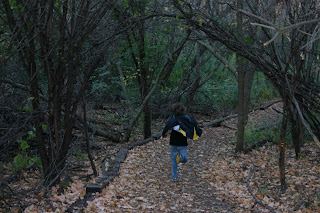 Here he is showing off his loot - an old whiskey bottle that he pulled out of the stream (it still had something stinky in it - hopefully that was whiskey ;-)), a rock with cool dual colored moss on it, and a few sword-worthy sticks. We were out there until after sunset. Life is Good. 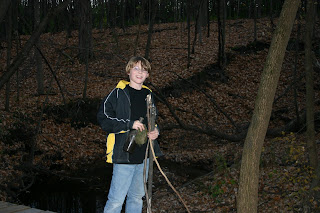 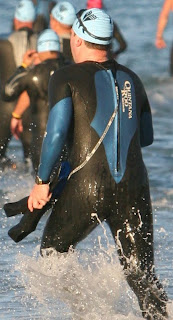 My friend Erik was taking pics of Julie (10:32!!) at IM FL over the weekend and saw this guy with flippers on the swim. At the turnaround he dropped them in the water, exited and ran over the mat, and retrieved them when he entered for the second lap. The official said something to him, took his flippers, and THEN LET HIM CONTINUE THE SWIM. (What the...???)
Cheaters have reached an all new low. C'mon folks, Ironman is not about Cheating-to-get-there. It's about courage, strength, perseverance, and integrity. What is the world coming to????
Let's find out who this guy is and make him famous.
P.S. - Congrats again to the following Real Ironmen: Julie, Terri, Erin, Tim, Michelle, Shelly and Lana (whose time I predicted) ;-)
Posted by SingletrackJenny (formerly known as IronJenny) at 11/04/2008 08:39:00 AM 28 comments:

Julie Hull - you are doing AWESOME!!!! What an amazing bike split and your first leg of the run is smokin'!
Terri - wow - isn't IM fun when you don't have a herniated disk? It must be like a whole other experience!  Keep up your strength on the run and I will win the predicted finish time!
Erin - you're doing it!!! Can I call you IronErin yet? I hope you have your phone in your bag at the finish because I will be ringing it until you pick up!!!!
Shelley - looking good!!! You are a pro. But what is the deal with listing Accountant as your occupation? Veterans are supposed to be funny things - like Nascar Wife, or Leaf Raker, or MultiTasker... ;-)
Tim - I wish I were there to high five you on the run - you will do a great time!
Lana - Holy Smokes! Great swim. Great Bike. STill checking on your run, but you are clobbering the course!
Michelle - wow! Twenty-plus mph on your second split of the bike... and a strong swim - and you're makin' me proud with that T2 --- can't wait til you post a run split.
Posted by SingletrackJenny (formerly known as IronJenny) at 11/01/2008 03:25:00 PM 1 comment: