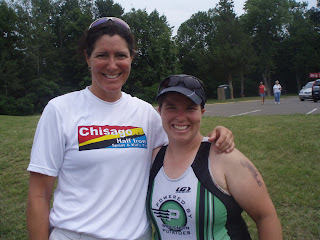 Lots of other bloggers were there, too - Steve in a Speedo (who did awesome in the sprint - he can run a 5K under 20 minutes after swimming and biking... wow). He didn't even wear his underwear over tights during the race! I can only imagine what it's like to be really, really fast --- well fed , well-rested and well-trained, only to have Steve fly past you, wearing a costume, (fueled by a can of spaghettios and spray-can cheese product!)---  as you are high-tailing it and feelin' proud during in your "A" race.
Bwahahahahah! ;-)
Jumper and his camera were there, with Miss Alleycat and Danielle from Iowa. Thanks Danielle for talking to me on the run - I was getting hot and tired and getting ready to start walking, just as you cruised by on your bike...
Some of my other friends that I used to just run with raced, too and - everyone did really well. It was the first half IM distance for Diane, Holly and Erin - woohoot!!
Anyway, here are a couple more pictures from yesterday - IronNick said he took a lot of good ones, too, but he hasn't loaded them yet. I'll add them after I get them. 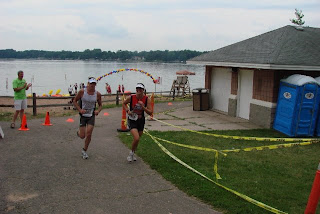 Jumper took this one of me coming into the finish chute. 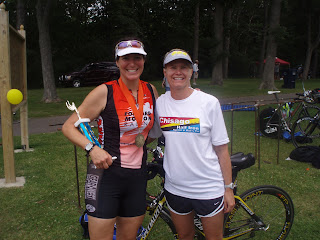 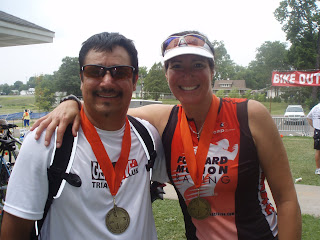 Me with my friend Mark (he did Phoenix marathon and Liberty Oly with Erin and me).  You can see the humidity on the air - ughhhh. As Mark was dismounting after the bike yesterday he slipped off his bike shoe and crashed right in front of everyone cheering in transition. He took a bow and continued sprinting off on the run portion. Great recovery and great road rash, dude!
Posted by SingletrackJenny (formerly known as IronJenny) at 7/28/2008 09:35:00 AM 26 comments: