We took the kids to Boston for Spring Break - it was great! Bobby is really into history and it was his choice that we come here for vacation. We saw lots of historic sights and did a lot of walking, Everthing in Boston is close by, but being a city-vacation we did use lots of different kinds of transportation: plane, train, taxi, trolley, ferry, and foot, as Bobby pointed out on the way home.
Below we found Paul Revere's gravesite near Boston Common... perfect place for a family portait. (?) 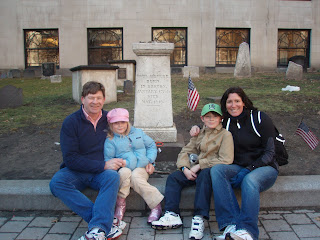 This is a photo I took in Salem - the architecture is so quaint. We didn't actually meet any witches but the kids thought they saw a ghost at the birthplace of Nathaniel Hawthorne. Did you know that he changed the spelling of his name? He added the "w" because he was so ashamed of his grandfather (spelled Hathorne) who was one of the judges presiding over the trials that accused (and ultimately put to death) 19 innocent people during the Salem witch trials. 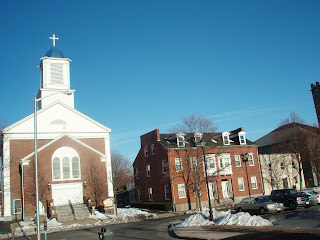 Of course the hotel pool was a hit every night. Here Ally is being a swimming fashionista. 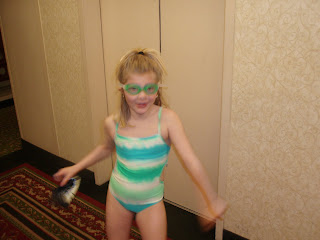 I took this picture below because if I just told you all there was such a place as "Bunghole Liquors" none of you would have believed me: 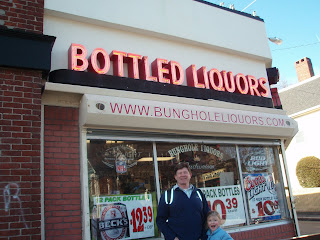 Below is Bobby by a cannon on the USS Constitution. Amazing that ship is 209 years old and still seaworthy. They still take her out at least once and up to several times a year. Those cannons pull back 4 to 6 feet when they are fired... those sailors really needed to have their sea legs! We saw a few sailors before we boarded for the tour, and we thanked them for serving and the kids wanted to get their picture taken with them. While we were on board, we noticed they too had boarded and were engaged in a ceremony to re-enlist. I am just so grateful for the brave souls who look out for the rest of us. I love America, and being an American, and feel so blessed that only by the grace of God was I simply born here and that was all it took to be entitled to enjoy the freedom we have here, which was and has been ensured by the sacrifice and commitment and conviction of these folks and all who went bravely before them. Made me a little weepy watching them voluntarily re-enlist. 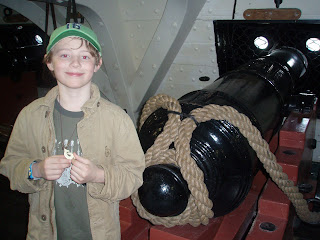 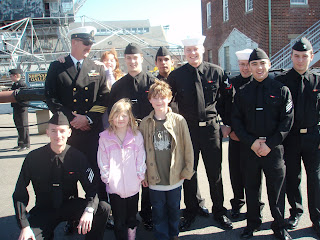 Here is Ally at Paul Revere's house, reading about his historic ride telling of the charge of the British soldiers. 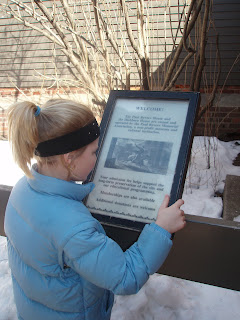 Here we are having dinner in an old Boston restaurant just across the street from Faneuil Hall. 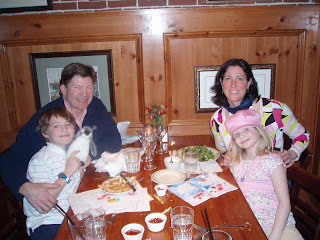 It was a busy and interesting week of history, science, architecture and most importantly: family time.
I did try to train while we were gone, but it just didn't pan out. It only took 3 strokes of the pool before it was time to flip turn, so I lasted all of 5 minutes and gave up. Then I ran on the dreadmill for 3 miles one day. That was it. But I enjoyed the rest time and my life doesn't need to revolve around triathlon. I figured I'd jump back in upon returning. So on Saturday I squeezed in 3 workouts to try and catch up. Today is Sunday, I'm pooped, and I have been drinking water, eating well, and playing with the kids. I am commited to a real, actually planned-and-written down schedule starting tomorrow.
We rode outside on Saturday... finally!! It was about 60 degrees or maybe even warmer. There are eight Zurich IM triathletes in this picture. Taconite Boy is third from the right; Marz_Racer is on the far right; Steve is fourth from right; Cliff is front and center in white jersey; Eric is 5th from left; Terri is 4th from left; I am 3rd from left; Tim is second from left. 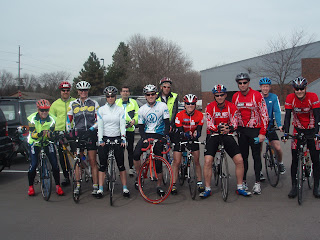 Below is an interesting Before-and-After picture: This is why I felt so weak on the 52 mile ride yesterday, well, besides actually BEING weak from not riding as much as I should have been... On the top is my derailleur and chain. It's a little dirty, no? When I pulled that black thing out today it looked like a worm - only it was made of bike grease, salt, and sand -- all held together with hair. Gross!!!!! As we rode along yesterday, I imagine it kept picking up more snow-plow salt and sand from the freshly thawed roads. I kept getting more and more tired and started asking people if I had a flat tire. So it was only HALF my fault that I was slow and getting dropped. Oh, and maybe that I ran 17.1 before the ride. But I toughed it out and was so excited that I didn't quit and go home that I ran another 2 1/2 miles after the ride with Tim and Jesse! 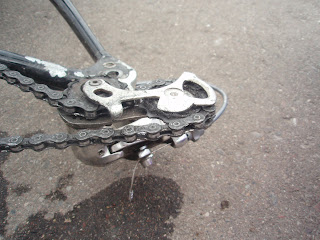 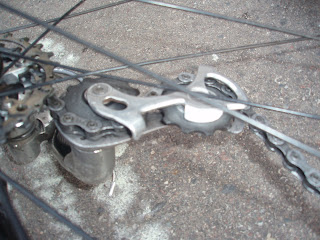