Work update
I had another great week at Coke, working with one of our Lead Account Managers. Don't know how he feels about being on my blog, so we'll leave him nameless for now. ;-) We've got a big Trade Tour this week with the UPPER upper echelon visiting our market so in addition to maintaining our current business, (I have 600 stores in my district) we are dressing up the stores that are featured on the tour with crisp displays. Friday was an office day, so I was lucky to have a couple of hours to sit with my notes, laptop and reports, and got to sort out all I've been learning, as well as try out the 10,000 tools I have at my disposal. I am a visual person, and visual learner, so I really needed that time to matrix in my head these tools and details that are pertinent to me being able to do this job.
I will love it. That much I know is true.
Long Run 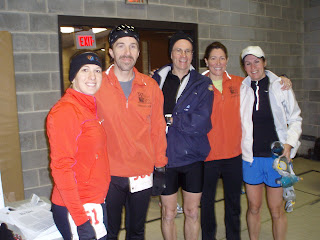 This weekend I had a taper week, so at Beth's suggestion, UltraGuy and I signed up for a 25K (15.5 miles) in and around Hopkins. It was really hilly but very nice. We all ran together for much of it, but Guy and I gradually pulled away from Beth who was chatting, I mean running with a guy named Noah or Nowell, only to learn that she later ditched him and had to run alone - I'm sorry, friend!!! Beth ran a bit over 5 miles before the race so she could get in a 20 miler - good job!!!
Here we are at the start. 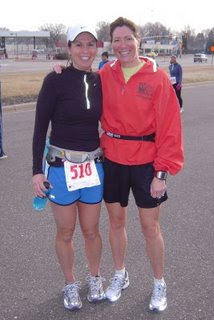 Guy and I ended up averaging 9:38's which I think is great considering the hills and the number of them we had to walk up. ;-)
Saturday night
Laura and Greg hosted a barbecue at their new place, which is adorable. It's bright and sunny (just like them ;-)), and is on Gray's Bay on Lake Minnetonka. So the kids were out on the dock with long sticks, trying to reeeeeeeeach and pull in the last thin slabs of lake ice so they could break them on the sidewalk. (Don't you just still kind of wish you were 8 and 10?) I was so certain somebody was going to go in the water and I'd have to retrieve them. It's shallow enough not to be scary, but I wouldn't want to jump in it and have to drive home freezing and muddy. It was great seeing everybody - Tim and Karen, TriNick, and Jenn Weeks. Jenn made a homemade squash soup that was amazing. She's like our group's resident gourmet chef. Between her and Bob, we should all be fed and happy in no time.
This morning. 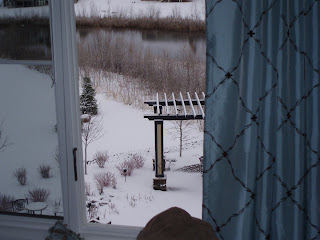 I slept in this morning and here's why - the fresh snow makes the world so peaceful. So this is the view from my bedroom window this spring morning in Minnesota. It's pretty, but enough's enough, ya know??
I will be heading off to church in a bit with the kids. Bob's going to hit the early service so he can try to catch up with us later. He's working with some buyers on the final design of their house plan (they're putting an awesome sport court in the house, which is very cool and fairly common nowadays around here, but requires some specialty construction codes and it has to be right, obviously, without compromising the style and flow of the rest of the house) and hopefully he will wrap that up without having to work all day... because the Pettises are coming over!
We are planning a multi-family vacation in June, not too dissimilar to the vacation we took last year with the Grays and Holmeses : 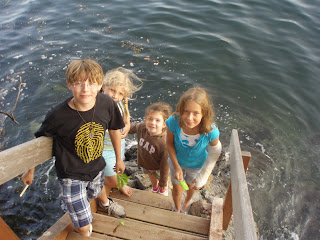 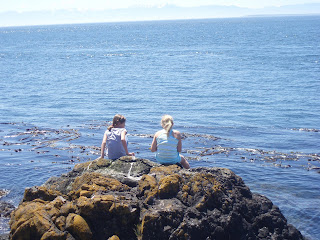 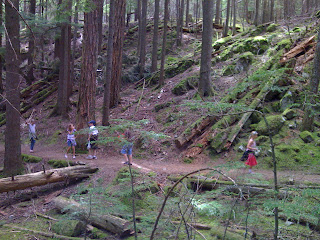 Guy's been busy finding links and attractions and we're going to sort through and try to get a cabin reserved. Their son Jeremy is the kid who runs 5Ks with Bobby. It will be a couple days on either side of the Deadwood Marathon in South Dakota. So we are plotting Mount Rushmore and the Black Hills later today.
Have a great day everybody.
xoxoxoxo
Posted by SingletrackJenny (formerly known as IronJenny) at 4/05/2009 08:32:00 AM

It was great to see you on Saturday! No worries about the race- I had a great time and it made me mile to have my personal cheerleader at the end! Good luck with the Trade Tour and your vacation planning! :)

What a great race! 9:38's on a hilly course while tapering...wonderful!

Have a good week!

Great job on the run. So glad things are going well at Coke!